flashing is the answer

Who knew that finding rubberized flashing tape would be such a project?

Yesterday morning I woke up and said good morning to the tree branch in my house. 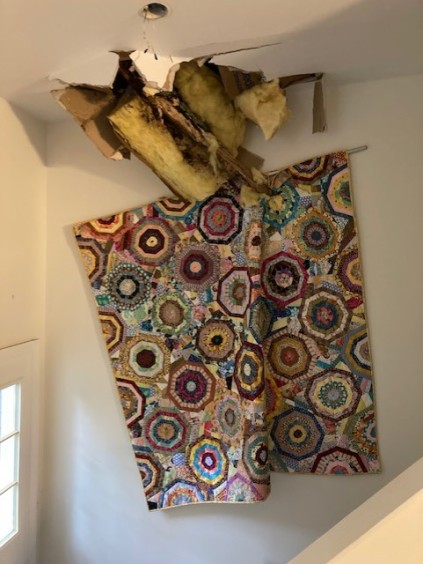 I’d hoped it would magically disappear, but no such luck.  Unfortunately the local squirrels had discovered all the new pathways across our roof and one found its way into my attic.

He quickly found his way out again when Banjo Man crawled up there to bail out the tubs of water from the all-night-long rainstorm.   Daughter Nancy was here to do the ladder work for me, thank goodness.

About 9:30 my heroes drove up.  Bill, whose 93-year old father started the tree-cutting business, arrived with his helper, Bob.  Bob was much younger and had worked for us before as an electrician.  His father and younger brother spent days at our house during the remodel of 2019.

During that week I had sold my mother’s car to his brother, which had been the answer to the family transportation problems, and I was glad to hear the car was still running beautifully and had been as good a deal for the young man as we’d all hoped it was.

Anyway…the guys went up on the roof and started cutting, “whittling away”, they said.  Hours passed.  More hours passed.  The pile of branches and chunks of wood in the driveway grew bigger and bigger.  Banjo Man went out to survey the situation and told them to come inside and eat something.  I had plenty of leftovers–pork, sweet potatoes, chicken breasts baked with spinach and mozzarella, pumpkin cake, etc.

I was so happy to feed them.  Here they were, working on a Sunday, worried about our house, doing what they could to help.  I kept reheating food while we talked about Perryville characters we’d known and loved.  That was fun.  Bill the Tree Man said our house was the worst “tree on a house” situation he’d seen in forty years.  Both men offered names of contractors and then started calling people themselves.  I think someone is coming to look things over this afternoon, but I’m not sure (I was out of the loop during my odyssey to Home Depot and last night Banjo Man said he didn’t want to talk about anything tree related).

A crane will be needed to get the body of the branch off the house, so Bill made phone calls until dark.  No one is sure what is going to happen today.  In the meantime, Bill jacked up one section of the tree in hopes of taking some of the weight off the roof’s peak.  We are all concerned that the front of the house could collapse if we don’t get the weight off as soon as possible.

I try not to think about that.

And why did I need the tape?  Well, the tarps had had to come off due to the sawing, of course.  And we have at least six holes in the roof, so Banjo Man hired Bob to go back up on the roof and do something to prevent the squirrels and rain from getting in (I have forbidden my husband from going up on the roof again–enough is enough and there are younger men to pay to do the work and if we can’t find any then we just let the house get wet).  Bobby said he would get as much done as he could before dark, which resulted in my speeding to Westerly (20  minutes away) and needing four workers there to help my harried self find just the right stuff one hour before sunset.

So the saga continues today when hopefully the crane arrives and so do the insurance adjustor and the contractor who might take the job of installing and repairing new roof rafters or tell us who can.

I was up and dressed at six.  Just in case.

This entry was posted in rhode island. Bookmark the permalink.