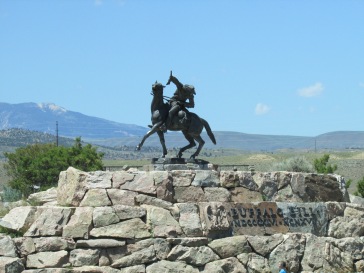 We arrived in Cody Friday morning, and of course the first thing Banjo Man wanted to do was eat.  So we parked downtown and treated ourselves to a Mexican lunch in a real restaurant.

Then it was time to hit the Buffalo Bill Center of the West.  We were especially looking forward to the Whitney Gallery’s collection of Western Art.  Once inside we decided to split up and meet in four hours.

Yes, four hours.  It would close in six hours and Banjo Man thought he would need all six hours to see everything.

I took lots of pictures on my Kindle but have yet to send them to this computer, so I’ll post the highlights in another blog post.

My favorite area was the Museum of the Plains Indians.  After spending over an hour there, I bumped into Banjo Man.  He had been in the new Firearms museum (the largest collection of firearms in the world) and told me he’d seen Zane Grey’s gun.  I was so excited and needed to take a picture of it.  He said I’d never find it and offered to lead me to it.

I declined, assuming I could find one measly rifle or ask one of the docents.  This turned out to be a stupid decision, because after an hour and a half–and two complete walks through the Firearms exhibits (a total maze) I still hadn’t found the Winchester 1895.

But I had lots of steps on my Fitbit.

I’d given up–temporarily–and was in the Buffalo Bill museum when I spotted Banjo Man again.  We strolled through that together and saw this: 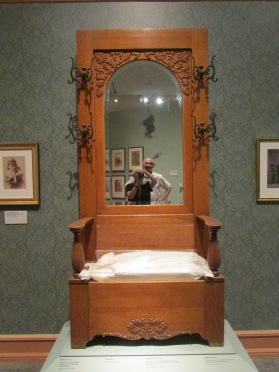 It had once lived in Buffalo Bill’s wife’s home in North Platte, Nebraska.  Banjo Man’s sister and family had owned that home for many years.  Do you see us in the mirror?  Hey, Hall Mirror, we know where you’ve been!!

Banjo Man said they used to have a wrench for this on the farm, but no one knows what happened to it.  He sounded sad.  Does that mean he wants our next road trip to include this?

I felt a cold chill run down my back.

Back to the rifle, which Banjo Man led me to.  By this time we were both staggering with exhaustion.

His monogram is in gold. 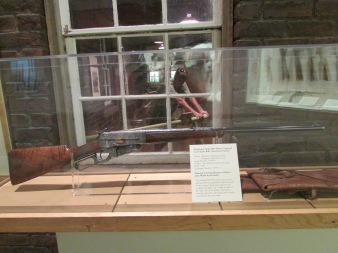 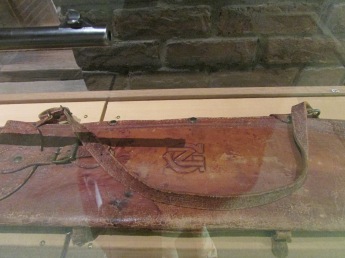 We limped out of the building and to the very hot parking lot after five hours.

And then we were off to our hotel, which turned out to be rather pricey.  I think I booked the wrong Best Western online last month.  Still, we had nothing to complain about.  Banjo Man unloaded his nine bags from the car and then hustled off to a local grocery store to buy more food for his endless, insatiable appetite.  We shared a steak dinner in the attached restaurant and I had a green margarita made from tequila, melon liqueur and cucumbers.

I feel it is my duty to try different margaritas so I can perfect them for my friends at the lake. 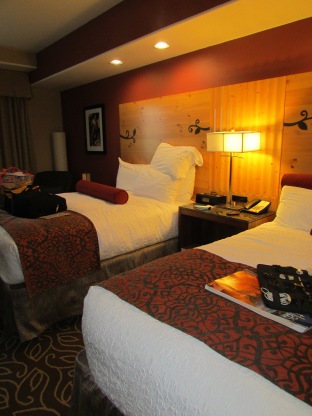 This entry was posted in road trip. Bookmark the permalink.