There’s a coffee house in Austin called The Strange Brew.  Not only do they serve coffee, but they are open 24/7 and are a fantastic music venue.

This morning was the weekly Sunday Sinner’s Brunch, so Banjo Man, Son #2 and I were there before the first song was sung, at 11 AM (which was no small feat, considering a 2 AM bedtime the night before, but that’s another story).

The place was packed, but we squeezed in and found seats.  The usual members of the Purgatory Players were there, but this morning  found a lot of other local musicians in the audience.  And they took turns getting up on stage and performing.   Warren Hood played the fiddle.  Cindy Cashdollar played some mean blues on a dobro, Guy Forsyth sang some gospel songs that had Banjo Man jumping in his seat.  Slaid Cleaves stopped in, as did Steve Poulz.

Each week the band raises money for a local charity. 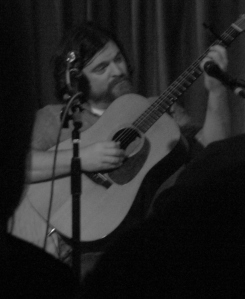 We had such a good time this morning that we decided to go back at 8 PM to hear the “Brewbirds”, Warren Hood’s band with Emily Gimble (granddaughter of Johnny) on the piano.  Once again, we sat for two solid hours of great music, for a $5.00 cover charge and tips for the band.  How can it get any better than that????

This entry was posted in austin, books & music. Bookmark the permalink.