Banjo Man would not watch it with me, but he actually drifted in and out of the living room and then couldn’t help watching the last 15 minutes.

Meanwhile I was firmly cemented to the couch.

Jeremy, as you know, is in the “Ammuhsson” (Amazon), which is the size of 2/3 of the United States and the Ammuhsson River is bigger than all the other rivers in the world put together (or something like that). 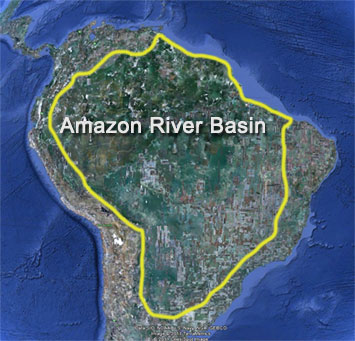 He is spending the year (A YEAR) in the Ammuhsson and if you’ve read his book, you know he loves it there.  The man **really** loves it there, though I have yet to identify with that emotion.

To me, the Ammuhsson looks like the last place on earth anyone would want to visit, never mind spend an entire year.  I mean, really, have you seen that murky, filthy, brown water???? 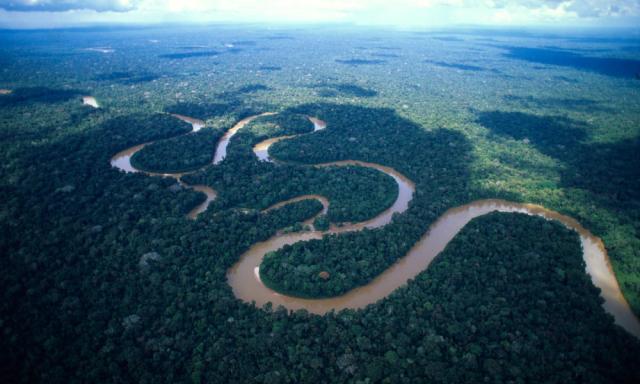 Anyway, Jeremy is there and he has a new mystery to solve:  he’s heard about three unsolved deaths in the Ammuhsson River.  So he goes to the site of the first one, which happened ten years ago when a teacher was found floating in the river.  His soccer team found him, and there were black marks on his chest.

“What would create burns like this on a man’s body?”  Jeremy asked the camera.

“Not electric eels,” Jeremy said.  He went on to give an explanation as to why the electric eels he’s seen before wouldn’t leave marks like the ones on the teacher’s body.

Then he asked one of the former soccer players what he thought.  The man said something in Portuguese that translated into “electric eel”.

He then goes to another place where a young man died after his father sent him out to check the fishing nets.  His family, perched in their stilt-house on a river, finally realized he hadn’t returned and sent out his brother to find him.  Well, there he was, floating (like the teacher) and dead, with those same wide black burns on his chest.

Jeremy:  “What could electrocute a man and leave these kinds of marks?”

A local doctor, who actually saw the burn marks for herself, agrees to talk to Jeremy about it.  He asks a lot of questions and scribbles in his notebook (I love his notebook).  The doctor says something in Spanish that translates into “electric eels” and shows Jeremy a youtube video of electric eels attacking and killing a caiman.

This is a caiman. 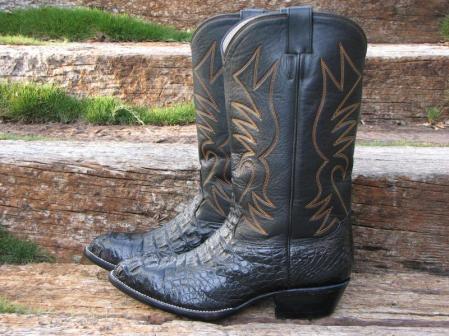 These are caiman boots.

Except for a certain tribe in a remote section of the Ammusson that catches them with their bare hands.

A young man from the tribe, conveniently in town for the week, says something like, “We do it all the time.  No prob.”

“I have to see this,” says Jeremy, his blue eyes lighting up with excitement.  “I don’t believe it’s possible because fifty gazillion bolts of electricity can easily kill a man and leave big black burn marks on his chest.”

He begs the young man to take him to the tribe so he can film the hands-on eel catching skills.

“Uh, not so fast,” the kid says.  “You have to get tribal permission.  And you have to get checked out by a doctor, in case you’re carrying a disease or have a head cold, because our tribe has almost been wiped out before by crazy white people like you.”

But nothing stops Jeremy, and after he’s given a clean bill of health he and his film crew load up a prehistoric boat with barrels of gasoline and mosquito repellent and head five hundred miles down the Ammuhsson to see if they can get permission from the head of the tribe.

It’s scary on the river.  There are warring tribes in this region.  Jeremy, under a cloud of mosquito netting, can’t sleep.  He doesn’t mention the Rockefeller incident, but I would guess he’s rethinking the whole “gotta see these eels” thing.

The next morning they arrive safely–thank God–on the river bank where the tribal children and the tribal chief are waiting for them.  Everyone looks very serious.

Jeremy:  “This isn’t what we expected.  Obviously there is tension.”

Uh-oh.  I suddenly am very afraid for Jeremy, but I remind myself that Jeremy survived, because he has been on every U.S. talk show two weeks ago and did that really cool live show on Animal Planet.

Turns out that the young man (the one who invited Jeremy to the eel-catching) is given some bad news:  his mother is dying and not expected to live through the night.  Jeremy gets very emotional over this.  I feel badly for him, as it is obviously bringing back sad memories.

“This is no place for guests,” he says.  You can tell he hates intruding.  Jeremy never likes to intrude–he’s polite like that.

But he is invited to go fishing by another family, so off to the river they all go.  While a young mother breastfeeds her baby and tries to stay out of the way of the fishing lines,  Jeremy catches two enormous red-tailed catfish right away, but the old man he is fishing with shakes his head and says nobody really likes to eat those.  Back in the brown water they go!  Jeremy was trying to catch a fish for his host’s dinner, but he’s typically happy to release the giant catfish.

At last the tribe beckons him back and prepares for eel-catching.  This means they all go to a hut and the medicine man prepares a ceremony for the fishermen.  Jeremy is told he can’t participate; since he is not a protected member of the tribe, the eels can and will kill him.  Or at the least give him a heart attack.

The future eel catchers are burned with hot sticks and treated with mysterious concoctions and then start vomiting all over the hut.  There is some talk of frogs and how it’s better to be electrocuted on an empty stomach.  The vomiting continues.  Jeremy looks like he’d rather be in England.

It doesn’t get any easier the next day.  Jeremy scurries through the jungle in a harried attempt to keep up with the tribal fishing guys, who have recovered from a bad night of food-poisoning-by-frog-entrails.  It takes a long time to get to the murky little pond.  Some of the guys jiggle sticks in the water to fool the eels into thinking that an injured animal is getting a drink.

I don’t get it.  Neither does Jeremy, who no longer wishes he was back in England but is now mesmerized by all this weirdness.

I feel very badly for the pregnant woman.  Did she draw the short straw this morning or what???!!!

Suddenly the brown mucky water goes crazy with thrashing, wriggling eels.  The fisherman grab one of them and hold onto it with his bare hands.  You can almost see the electric shocks radiating down it’s slimy back.  It’s huge.  And scary.  And Jeremy gets really close to it, because his director told him to.

No one gets electrocuted.  The pregnant woman is nowhere to be seen (hopefully she’s sitting on a tree stump a hundred yards away and eating a fruit cocktail and leafing through the latest issue of Claudia).

Banjo Man yells, “Get that thing away from your face, Jeremy!  God, is this guy crazy???”

Jeremy, the eel two inches away from his attractively high cheekbones, says these eels may or may not have caused the massive black burns and the deaths he’d heard about, but it will remain a mystery.  For now.  Because he is going to be in the Ammuhsson for a whole year and HE WILL BE BACK. 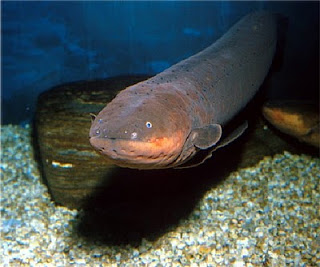 This is an electric eel.

These are eel skin boots.