Story Man and I went into town for a Big Night Out last Friday.  First we headed to a favorite restaurant on the city beach to see Retired Mountain Lady and Bruce Bishop’s band. 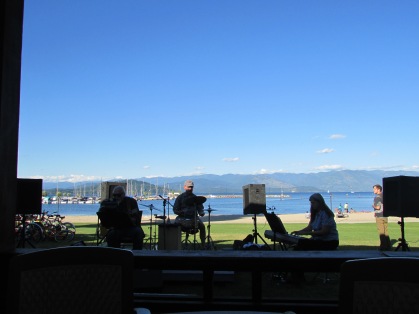 Then we hurried over to the Panida for the McMurtry show.  James McMurtry is a very big deal in Austin, especially, and a favorite of Story Man’s.  We saw the “Sold Out” sign and were glad we had purchased tickets weeks ago.

Half an hour before the show and we had a hard time finding two seats together!  The music fans in Idaho were seriously excited about hearing McMurtry.

I’d heard him before, in Austin, but in crowded venues where I couldn’t see, couldn’t really hear all that well and couldn’t sit down.

This was much better.

My favorite song, Choctaw Bingo, just about brought the house down.

After the show Story Man ran into one of the band members outside the theater.  To say the guy was surprised to see Story Man is an understatement.  Once he got over the shock of seeing a fellow Texan in north Idaho, he told us the band was thrilled with the crowd and the reception it received that night.  He declared it the best show of the tour, by far.

Story Man had expected to see a younger crowd.  I’m sure he hoped to see women under forty.  He’s been surrounded by over-60 baby boomers for many, many weeks.

I’d expected a younger, hipper crowd, too.  I’d gone prepared, with ear plugs and a candy bar, and expected to curl up contentedly in a corner seat while Story Man mingled with people his own age.

Baby boomers easily comprised 90% of the audience.  Story Man was once again surrounded by gray-haired, rowdy people.  I saw one woman bouncing near the stage, her cane flailing above her head as she kept time to the music.

That’s how we party in north Idaho.

This entry was posted in lake, music. Bookmark the permalink.