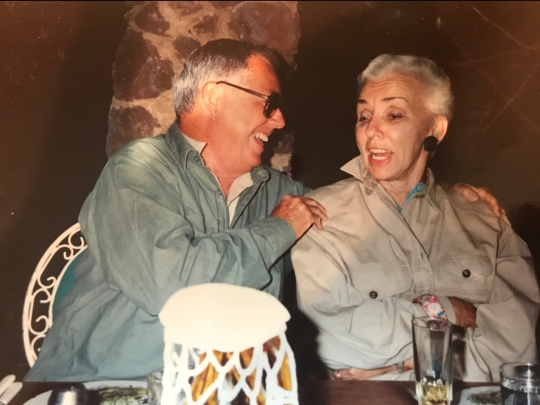 Mom and Dad on safari in Kenya.

This picture was on my mother’s refrigerator for twenty-six years.  That’s how long she was without my father.  They were together for fifty years and very much in love until the end.  She never got over losing him.

She died yesterday.  Peacefully.  In her sleep.  The dementia had worsened very, very quickly.  On her 94th birthday, April 9, she had Face-timed with me.  She knew it was her birthday, she knew who I was, and she was chipper and cheerful.

And then it all went downhill.

Death during the Time of the Virus is a very difficult process.  Hospice was called last weekend, but only one Hospice worker was allowed in to the nursing home–and only once.  All recommendations were done by phone after initial assessment.

I was allowed one “end of life” visit, for 30 minutes only, on Monday.  I wore a gown, mask, and gloves.  It’s no wonder my mother had no idea who I was.  But I doubt she would have known anyway.

There are severe restrictions on funerals now, so there won’t be any kind of service.  Only five people can attend any gathering, either at the funeral home or the chapel at the Veterans cemetery.  So Banjo Man, daughter Nancy and I will represent the family and do our best to make sure we honor my mother as well as humanly possible.

The rest of the family sadly has to stay in California and DC and Texas, due to quarantine rules.  This of course is not what anyone wanted or envisioned when it came to saying goodbye.

I’ll end this with one of her favorite pictures, taken a couple of years ago at the beach with the great-grandson she adored.

“Tell me a ‘John Story’,” she’d always say.  Her face would light up as we’d describe his latest antics.

Rest in peace, Mom.  We know Dad is making you laugh again.

This entry was posted in family, rhode island. Bookmark the permalink.

8 Responses to together again