I’m making several special stops on this year’s road trip west.   I’ve wanted to do these little pilgrimages for years, but various circumstances and deadlines and commitments kept getting in the way.

When I–a skinny bookworm–was growing up, my father gave me a book that he loved.  As my grandfather had loved.  I still have that battered first edition.  It smells very old and it is falling apart, but it’s a beloved possession.

I still reread it once a year.  It differed from most of Grey’s other works in that it was told in a female point of view and was a “conflict of lifestyles” romance.   I read all of his other books and was amazed at the difference in tone and characterization.  Years later I read an article that suggested that Grey’s wife Dolly may have written some of his novels, that he would mail descriptions of his travels (and he was an adventurous world traveler) home to his wife, who was raising the children, editing his manuscripts and dealing with the business of publishing.

Zane Grey, called “the greatest storyteller of the American West” was one of the most popular writers of his time.  After he and Dolly married–and before he became famous and moved to Hollywood–they lived in a house on the Delaware River, in Lackwaxen, Pennsylvania.

This morning Banjo Man and I headed to Lackawaxen, 226 miles from home.

First we packed the car.

And then, about an hour and a half into the trip we became very hungry. 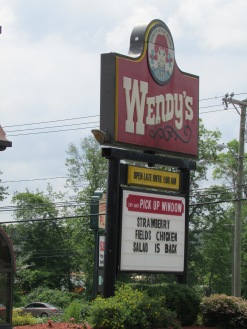 We missed the first road to Lackawaxen, so we had to take a different route.  And Banjo Man took four wrong turns, two of which were my fault.

We managed to see a sign for the Zane Grey museum but were blocked by a “Road Closed” barricade.  A woman at the general store told us to go around the other way–the “Scenic Road” we needed to be on looped along the Delaware River.

We made a lot of left turns and found the other end of the Scenic Road, but it was blocked off.

And because we were lost we crossed this famous, historic toll road bridge.  Twice.

And then Banjo Man, MY HERO, had had enough with barricades, so he just drove right around it onto the forbidden, blocked off road.

I was so happy.

To Be Continued…because the Hampton Inn’s internet is really, really slow and I can wait no longer for the photos to load and I have to go to sleep now.

This entry was posted in books & music, road trip. Bookmark the permalink.