emilio is in the wind 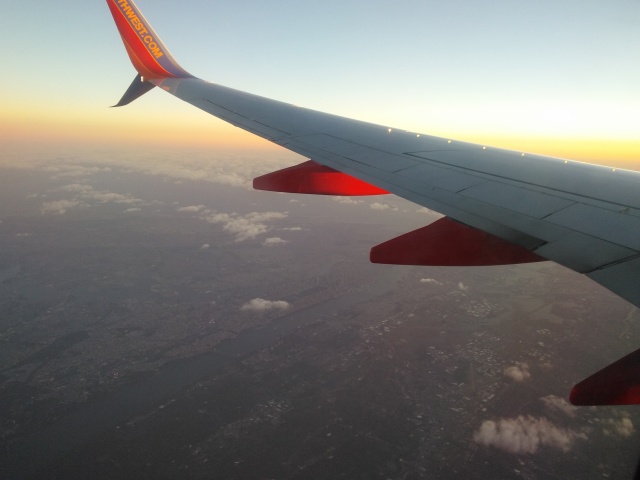 Flying into the sunset over New York and New Jersey.

Tuesday afternoon I flew to Baltimore, on my way to Austin to celebrate the Funny Grandson’s birthday.  There wasn’t much time between the flights, so I made my way to Gate B3 and joined the crowd waiting to board.  I found a seat next to a huge black man (was he a blues singer heading to Austin?  a former football player?) whose carry on at his feet was a paper shopping bag stuffed with a pair of giant new tennis shoes and a well worn Bible.

Uh oh.  I got out my Kindle and looked for something to read.  I had just bought a Subway sandwich to take on the plane with me and my carry on bag–the only piece of luggage I was taking to Texas–was stuffed so full I couldn’t zip it up over the sandwich.

He finally turned to me and moaned, “I am so, so scared.”

Me:  You’ll be fine.  Flying is easy.  And the people in Texas are very, very nice.

He started to cry, fat tears rolling down his cheeks.  He didn’t even seem to notice.

“Really,” I said.  “I fly to Texas all the time.  It’s going to be fine.”  Inwardly I was praying Please don’t let him sit next to me on the plane.

“I’ve done something bad,” he confessed.  “Really bad.  I’m going to rehab in Austin.  Because if I go far away to rehab and then come back it will show that I didn’t run.  Because I could run.  To Puerto Rico.  There ain’t no extradition in Puerto Rico.”

He introduced himself, sticking out a huge hand.  “Emilio,” he said.

I shook his hand and gave him my name.  He cheered up.  One of his bosses had the same name and she was a “woman to respect”.  Which meant I must be, too.

Damn right, Emilio.  Stop crying and get on the damn plane.

He went on, constantly crying, about a $100,000 (a fine? the amount of money he stole?) and how he’d done something really bad and how he couldn’t go to prison–a possible 10-year sentence— because he would die, but he couldn’t run to Puerto Rico because he’d never see his wife or his grandchildren again and he wouldn’t be able to come home when his mother passes and he would be all alone.

Me:  You’re in a corner and the only way out is to get on the plane and go to rehab.

I was getting pretty tired of all the crying.  I wanted to slap him and yell, “Man up!!!”  but for all I knew he could have murdered someone in his quest for drugs.  I clutched my purse close to my lap while he told me he worked construction, on a crew right here at the airport, but this was the first time he’d ever been inside the airport.

After that we chatted for a few more minutes–more of the weeping “I’m so scared” from him and the “you have to do what you have to do” from me until the Southwest official made the announcement for those who had qualified for pre-boarding to line up, that boarding would start in about five minutes, that the plane was totally full.

That’s when Emilio jumped to his feet, grabbed his shopping bag and took off.  Who knew such a big man could run so fast?

I never saw him again.  There was one empty seat on the plane and by coincidence it happened to be the one next to me.  It was a lovely, quiet flight for 3 hours and 20 minutes.  I wondered where Emilio was.   Had he gone home?  Booked a flight to Puerto Rico?  Was he on the run, hitchhiking to Mexico?

Goodbye, Emilio.  I suspect you would have been better off in Texas.

This entry was posted in travel. Bookmark the permalink.

3 Responses to emilio is in the wind