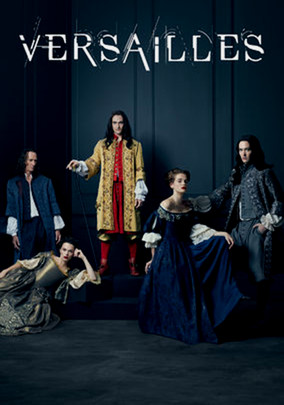 We had no expectations.  We were both tired, but at 6:15 it was too early to go to bed.  We had a few hours to kill before collapsing (Banjo Man had had a colonoscopy that day so he was still a bit groggy).

“Versailles” is quite the Netflix show.  Lots and lots of all kinds of sex, so beware of watching it if the kids are around.  From what I read, the Brits called it pornography and the French were ticked off that it was filmed in English.

It’s all about Lous XIV, the “Sun King”, and his determination to build the grand palace of Versailles thus never having to deal with the treacherous nobles in Paris ever again while pledging to make France the world center of culture.

Plus he has a lot of girlfriends there in court  (I think he ended up with 15+ illegitimate children).

And a gay younger brother (whose wife the King sleeps with occasionally).

And his own version of the CIA.

I have no idea how historically accurate this all is (I doubt if this version would be found in your average college textbook), but the writers certainly know how to write a cliffhanger.

At times it’s difficult to tell who’s who, because it seems that most of the men prancing and plotting around Versailles (when it was a “mere” hunting lodge) have long, dark, curling locks and little beards.

Banjo Man and I gave up trying to figure out the cast once we finally identified the King and his brother.  There’s a valet, CIA director and a couple of noble hangers-on that made us pause the show and say, “Who is that again?  The spy guy?”

There were a few confusing flashbacks in the first episode, but once that was over with the plot hurtled into sex and intrigue and all sorts of mayhem.

In other words, highly entertaining if you’re not expecting something sophisticated like “The Crown”.

One of my favorite moments was when the King’s brother, enjoying a cross-dressing evening with his boyfriend, beats the heck out of a clothing designer who had put his face on a doll displaying a new dress design.

Best line of the episode is when the brother, still in a corset and high heels, has to face his older brother (who is not amused) and shrieks, “You might be King, but you can’t tell me what to wear!”

Having raised three teenaged girls, I could identify–for the first time in my life–with Louis XIV.

This entry was posted in rhode island, television. Bookmark the permalink.