“Is there a show we can watch?”

I’ve heard this particular question from Banjo Man for months now.  Life is easier, I’ve learned, when we are starting or in the middle of watching a new series on dvd or Netflix or Amazon.  The question is so easy to answer then.

But when we are trying to find something new?  That gets complicated.

We’ve become accustomed to streaming “content” while we eat dinner in front of the television.

We can do that because we are older now and no longer have to set an example or dish out portions of casseroles to six hungry children.

It’s very relaxing on the couch.  My version of the 1950’s tv stand is a little old round table I bought for $1.00 at a yard sale.  It’s so ugly that when we have company I hide it in my bedroom.  But it’s the perfect height and size for a dinner plate, fork and glass of water.

So…back to the question, “Is there a show we can watch?”

Luckily, while browsing through Netflix titles, we discovered this dark crime series, “Bordertown”. 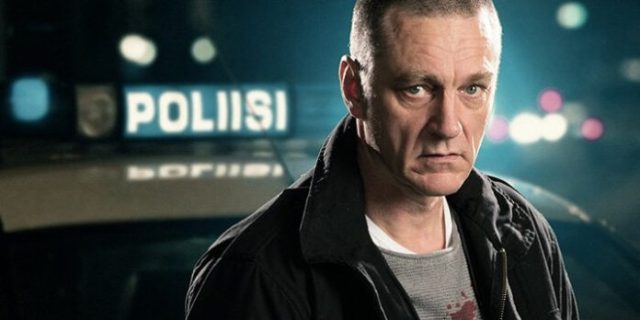 It’s a Netflix Original, a crime thriller set in a town on the Russia-Finland border.  The main character, a police detective, is pretty much a genius at solving murders.  But he and his family want a less stressful lifestyle in a smaller town, so he takes a job heading a new crime-solving team far from Helsinki.

There are subtitles, which Banjo Man loves.  The crimes are solved within 2 or 3 58-minute episodes, but there are clearly story arcs that could continue over several seasons.

There are times it gets confusing, due to most of the women in the show being blond.  After all, this is Finland.

Many times, over the course of the first mystery (which covered three episodes), Banjo Man turned to me and railed, “I thought she was dead!”

I had no clue either.  So many blond teenagers! We had to wait it out, read the subtitles and eat our roasted broccoli.

If you like the “Harry Hole” books (set in Norway) by Jo Nesbo or the series “Department Q” (Denmark) by Jussi Adler-Olsen, you might want to give this a try.

This entry was posted in rhode island, television. Bookmark the permalink.