We’ve had a leak under our kitchen sink.  I’m not going to tell you how long it’s been going on, because that would be embarrassing.

Last spring we were determined to Solve The Problem.  First stop?  A kitchen-and-bath store in Westerly.  I did a little pre-shopping research and decided that another stainless steel sink was the most practical choice.

And here it was: 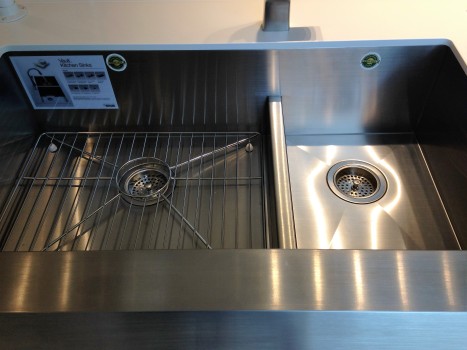 Ours won’t have the stainless front.

We decided upon a faucet, too.  A pretty, swoopy one.   And then realized that by the time we found a plumber, ordered the sink and had things ready to be installed, it would be too late.  Summer was a-comin’ and time had run out.

Plus…we had spent too much time toying with the idea of putting in a new counter.  Only we couldn’t decide what we wanted.  Quartz and granite and marble were all too expensive.  Formica was affordable, but after collecting dozens of sample chips from three different stores I was no closer to finding the perfect shade and texture of cream-ivory-white-beige.

We talked about it again this fall, but once again…we ran out of time before Christmas vacation.

As of Saturday we were still reminding each other, “We should get this done before summer,” and “As soon as we’re feeling better we should make some decisions, find a plumber, get this fixed.”

Yep.  We’d agree we really should do something and then get back on the couch, with our blankets and remote controls.

Our dishwasher died over a month ago.  Not exactly tragic, but inconvenient.  I actually wondered if we could do without it, but after a month of doing dishes by hand Banjo Man was DONE.  We’d shared the chore, but we never seemed able to keep up with it.

Saturday we bundled up in our warmest clothes, stuffed extra tissues into our jacket pockets and headed to the dump, then to town.  We bought a Maytag dishwasher in record time (10 year warranty, go Maytag!!) and then tried a new fast-food Mexican place.  It was like a Subway for tacos–you line up and tell the taco maker what you want her to put into your taco as you study bins and bins of toppings and fillings.   They even had a salsa bar.

Yesterday the installer came with the new dishwasher.  It turned out he has his own handyman business and said he could fix our sink.  Or install a new one, along with the faucet.  Banjo Man was trying not to do a happy dance right there in the kitchen.

After the guy left, we made an instant decision to forget about installing new counter tops.  I don’t know why the idea of making decisions about counters and back splashes and paint seems so overwhelming to me, but it does.

The ugly truth?  I might be too old for remodeling projects.

Later that day we returned to the store where we’d seen the perfect sink and ordered it.  Eight months after our first shopping trip we’ll have a new sink, new faucet and new dishwasher.

I kind of love this.

This entry was posted in rhode island, shopping. Bookmark the permalink.

2 Responses to that sinking feeling