I had two very heavy suitcases, but there were two quilts in there so they took up a lot of room.  In my rolling “under the seat” bag I had every electronic device known to mankind, so it weighed about a thousand pounds and the stuff inside probably could have been reconfigured to send a man into space.  I would not be lifting this bag into the overhead compartment.

Banjo Man helped me check in at curbside, then I kissed him goodbye and headed inside the airport to catch a flight to Chicago and onward. 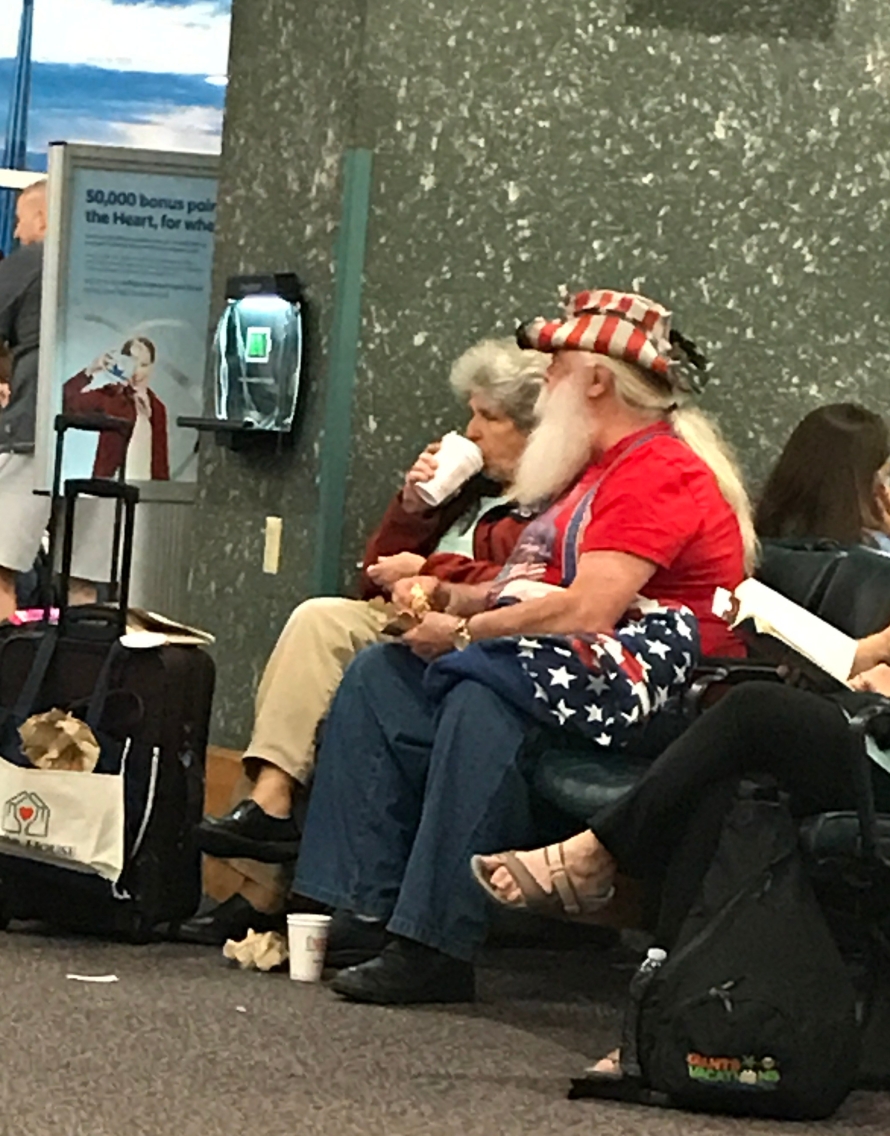 Looks like Patriotic Santa will be traveling with me today.

I always use “Early Bird” check in on Southwest, so despite their open seating policy I manage to snag a seat by the window (easier for sleeping and gawking at the scenery) in the front part of the plane.  The middle seat next to me remained empty until the last stragglers staggered down the aisle and a woman with a bulging totebag and a soft-sided duffle bag squeezed into the space.

There was a dog inside the bag, which I noticed had small screens.  I could see a bit of dark hair and one brown eye.  A large Yorkie, maybe?

The tote bag had a broken handle and stuff kept falling out on my feet.  The woman kept moaning, weeping and talking to the dog.  Obviously this was not going to be a quiet flight.

I don’t mind dogs on flights.  I once sat at the bulkhead with a large yellow Lab spread out under my feet.  His owner was a young blind woman from Montana on her way to school.  It was a lovely flight and the dog slept the whole way.

But all this moaning and weeping?  Very odd.

I put my ear buds in, closed my eyes and listened to music for two and a half hours until we reached Chicago.

I had about 90 minutes to kill, so I found a place I’d eaten before and went inside to have breakfast.  Lovely.

Then it was time to board the 3 hour and 50 minute flight to Spokane.  My seatmates this time were not weeping, thank God.  They were a pleasant young couple on their way to a wedding in Sacramento.  She was pregnant and they had left their other three children home in Illinois with Grandma.  It was their first trip away from the children, so they were quite cheerful.

Unfortunately Southwest had overbooked the flight by one seat, so they made an announcement asking if anyone would voluntarily wait for the next flight.  And get this!  They offered $1200 in compensation.  Needless to say, a hand went up immediately and a woman in front was a happy camper.

And then we waited to take off, only to find out that there was a problem with the de-icer and we could not use the plane.  Considering it was June and a landing in Iceland was a bit remote, this seemed a little too cautious, but hey, I don’t run the world.  So I said goodbye to the kids and went back inside the airport.  There would be a two-hour delay until a new plane arrived.

Which meant a good long walk (for the Fitbit steps!!) and a cruise around the Food Court (Greek cookies!!) and a bit of window shopping.  I texted My French Friend Janou to hold off on heading to Spokane until I was actually on the next plane.  My 10:20 AM arrival had turned into a 12:37 arrival.

The two hours went by quickly, especially since I had started a new book by Katherine Center, HAPPINESS FOR BEGINNERS.  I couldn’t put it down.

Then it was back on the plane, this time in the 5th row and hoping that the young couple would be my seatmates again.  And they were!  The seats next to me were still open 10 minutes later when they came down the aisle.  We were all happy.

The next three and half hours were spent either sleeping or reading.  And then we were in Spokane, my bags arrived and My French Friend Janou pulled up in front of the terminal to pick me up.

It was hot and sunny, another plus.  Janou brought her huge truck with plenty of room for large quilt-filled suitcases and we headed to Costco, the land of large quantities of food.

I bought a lot of  meat.  And crackers.  And cheese.  We filled the coolers and headed to Coeur d’Alene and lunch at the fancy Resort there. 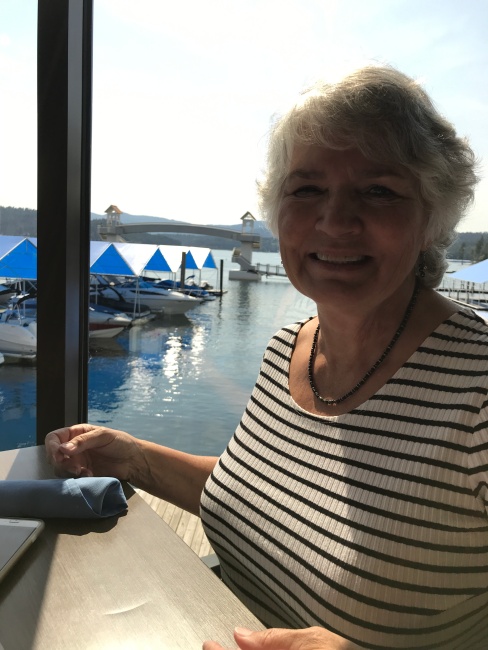 Always happy to see you, girlfriend!

And then, after a long chat-filled ride, we were back at the lake.  Once I unloaded the groceries and dumped the suitcases inside the door, it was time to enjoy the view from the living room windows. 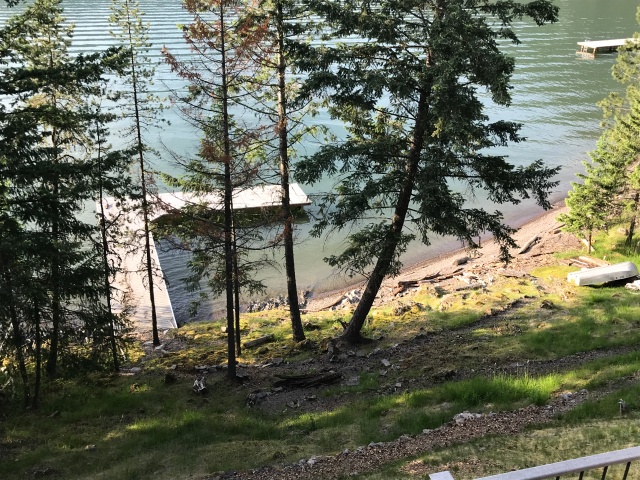 The definition of happiness.

This entry was posted in friends, lake, travel. Bookmark the permalink.