ghosts of the past

He and his friend Gary Palmer wanted to see the snow ghosts. 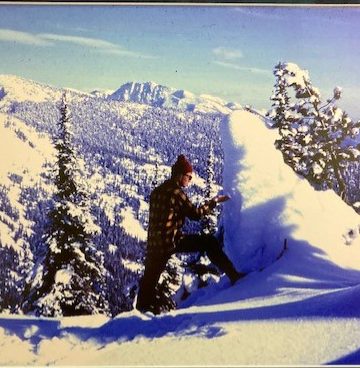 Snow ghosts, you ask?  They are the tops of the trees covered with snow.  Can  you imagine how deep the snow was?

They started their trek at dawn and didn’t return until dark.  They stopped twice to build campfires and dry their socks.

Before the fires went out, they had dropped three feet down into the snow.

Banjo Man has had lots of adventures, but this is one of the scariest and most impressive of them all.

But he was only twenty years old at the time.  Invincible.

I didn’t know him then.  If I had, I would never have sanctioned this trip.  Never in a million, zillion years would I have chirped, “Have a nice time.”

In fact I would have thrown a fit that would have been loud enough to start an avalanche.

So…Banjo Man was smart enough to do such wild things before he met me.

7 Responses to ghosts of the past