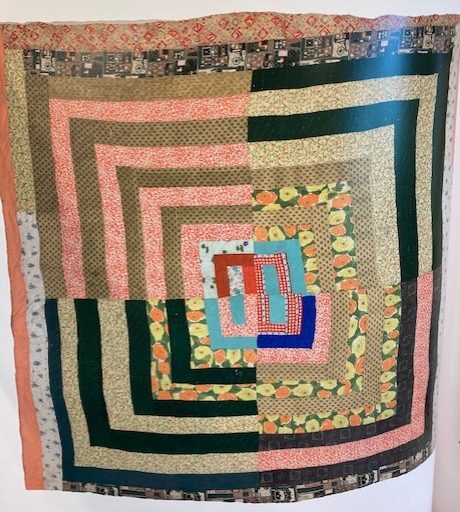 I don’t know how to blog about the Gee’s Bend quilters.   They are women descended from slaves, generations of women quilting to keep their families warm.  Women who used whatever they had and arranged old patterns to fit their vision.  Women who didn’t care too much about straight lines and perfect seams.  A community of quilters.

When I look at the photos of their quilts and read their stories I tear up.  It’s emotional.  Their quilts–from whatever material they had–kept their loved ones warm.  I get that.

I’ve always loved old quilts. I could look at them for hours, finding clues as to the woman who constructed them. Were they made as wedding gifts with carefully selected material? Were they utility quilts, cobbled together quickly and used to keep their families warm? Did they use wool batting from an old blanket? Or is that an old quilt stuffed inside a new one? Did the quilter run out of matching red scraps and her neighbor gave her what she had, a theory as to why those last three blocks are different?  Was she so poor she could only afford black thread for the quilting or was that the last spool in her sewing bag and there was no time to go to town to buy white?

There are endless stories if you look hard enough.

“…every quilt top shows a different personality.  I can tell which steps the maker disliked, and which ones he/she enjoyed. I can sometimes even tell if the pieces were scraps from making clothing. I might learn if the quilter is seasoned by their use of value, working with directionals, plaids, contrast, color, construction, etc.  I might learn that the quilter was a child, or at least a very new sewist.  I might learn that the quilter had vision problems.  Maybe it was one of the last pieces this person made.  It can all be so very bittersweet.”  —http://www.buttoncounter.com

“Surrounded on three sides by the Alabama River, Gee’s Bend has historically been a kind of inland island whose geographic and social isolation has garnered it–in an ironic twist–episodes of attention from the outside world. In the 1930’s, the area was identified as one of America’s poorest places…In the 1960’s, Gee’s Bend…became the location of the Freedom Quilting Bee, a sewing cooperative organized to bring jobs and income to local women…In the late 1990’s, the hard times of the community were again newsworthy when the Los Angeles Times published a Pulitzer Prize-winning article on the remoteness and economic plight of an endangered community.”—From Gee’s Bend, the Architecture of the Quilt, 2006.

“We was taught there’s so many different ways to build a quilt. It’s like building a house. You can start with a bedroom over there, or a den over here, and just add on until you get what you want. Ought not two quilts ever be the same. You might use exactly the same material, but you would do it different. A lot of people make quilts just for your bed for to keep you warm. But a quilt is more. It represents safekeeping, it represents beauty, and you could say it represents family history.” Mensie Lee Pettway, of Gee’s Bend.

“Collector William Arnett was working on a history of African-American vernacular art in 1998 when he came across a photograph of Young’s work-clothes quilt draped over a woodpile. He was so knocked out by its originality, he set out to find it. A couple of phone calls and some creative research later, he and his son Matt tracked Young down to Gee’s Bend, then showed up unannounced at her door late one evening. Young had burned some quilts the week before (smoke from burning cotton drives off mosquitoes), and at first she thought the quilt in the photograph had been among them. But the next day, after scouring closets and searching under beds, she found it and offered it to Arnett for free. Arnett, however, insisted on writing her a check for a few thousand dollars for that quilt and several others. (Young took the check straight to the bank.) Soon the word spread through Gee’s Bend that there was a crazy white man in town paying good money for raggedy old quilts.

When Arnett showed photos of the quilts made by Young and other Gee’s Benders to Peter Marzio, of the Museum of Fine Arts, Houston (MFAH), he was so impressed that he agreed to put on an exhibition. “The Quilts of Gee’s Bend” opened there in September 2002.

The exhibition revived what had been a dying art in Gee’s Bend. Some of the quilters, who had given in to age and arthritis, are now back quilting again. And many of their children and grandchildren, some of whom had moved away from Gee’s Bend, have taken up quilting themselves. With the help of Arnett and the Tinwood Alliance (a nonprofit organization that he and his four sons formed in 2002), fifty local women founded the Gee’s Bend Quilters Collective in 2003 to market their quilts, some of which now sell for more than $20,000. (Part goes directly to the maker, the rest goes to the collective for expenses and distribution to the other members.)”

So, what does all this have to do with a white woman who has a closet full of new fabrics, a fancy sewing machine and a state-of-the-art foot that delivers perfect 1/4″ seams?

I’ve desperately wanted to see these quilts in person but have never had the opportunity. In an online search of museums in 2018 that might contain some, I came across a website of the Gee’s Bend Quilting Retreats. Given four times a year, led by two quilters from Gee’s Bend, this three-and-a-half day retreat combined sewing, inspiration, instruction, praying and quilting while learning the art (and joy) of improvisation.

Of course 2019 was all sold out, so I put my name on the waiting list and hoped for the best.

I got the call for a sudden opening, but I was still recovering from cancer and didn’t have the energy to go. But I booked a retreat in 2020 and did a happy dance around the office.

And we all know what happened in 2020. Retreats were cancelled. The retreat center was sold. 2021 was a bust. I didn’t make the sign-up for 2022, but last week I was given a chance to sign up for March, 2023. And this time I got through! My fourth chance to go had succeeded.

I’m taking Banjo Man as my non-sewing guest. He can explore nearby museums and eat dinner with us. I think there are 20 registrants, so it’s small and personal and special.

This is the VERY GOOD NEWS of my Winter of Bad Things.  To hell with cancer, crashing trees, broken cars and windows and doors and furnaces.  I’m going to sew with the  Gee’s Bend Quilters!  I’m told there will be singing and praying and laughter, along with stitching.

This entry was posted in quilting. Bookmark the permalink.