banjo man and the big easy

We left home Sunday night and spent the night at a Hampton Inn next to the airport because we would be boarding our plane at 5 AM. 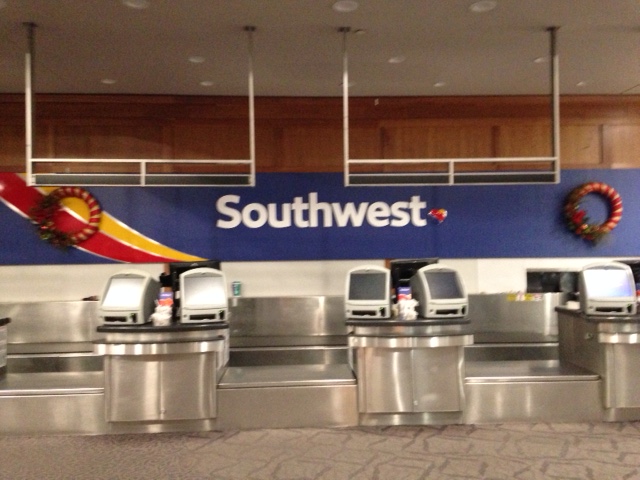 There were quite a few of us waiting for the counters to open.

And here’s the view from the plane.  The snow was a surprise.

We were in New Orleans before ten o’clock.

Our first meal was seafood gumbo at The Old Coffeepot.  Banjo Man ate a loaf of French bread.  We shared a shrimp po’ boy.

Then I staggered back to our hotel for a nap.

My husband, on the other hand, headed for a drink at Lafitte’s (this was on his vacation wish list).

Then he strolled the French Market for lemons and other snacks.

I don’t know how he had the energy.

We were off to the St Louis cathedral at 5:30 for a 6:00 concert, then on to the Gumbo Shop for a Reveillon dinner.

We were to go on to a jazz club for the 8:00 show and Banjo Man expected to make a night of it.

But during the fourth course of his dinner, which had included a sampler of red beans and rice, shrimp jambalaya and crawfish etouffe, Banjo Man admitted he was ready to call it a day.

He finished his bread pudding and my praline sundae first.

Tomorrow he has promised to pace himself.  We will stroll and shop and eat smaller amounts of food and we will hunt for jazz.

I think that sounds like a pretty good Tuesday.

This entry was posted in food, travel. Bookmark the permalink.