my banjo man is back at the lake

I am so happy.  I can’t stop hugging him.

But he doesn’t seem to mind.

His plane was landing at 9:30 Monday night, so my first plan was to drive in to Spokane at 7 PM and pick him up, then head home.  But the more I thought about it the more I realized how damn tired I was.

It had been a stressful week and I needed a Plan B.

So I reserved a room at the Ramada, directly across from the airport, and left the house at noon.  There would be a stop at Kohl’s (for baby gifts!), among other stores.  I have a baby shower to organize, too.  Lots to think about while listening to bluegrass cd’s and driving to the Big City!

I arrived at 4 PM and planned on using the Ramada’s pool and hot tub, indulging in a drink in the lounge, enjoying dinner in their restaurant and watching the train wreck that is always “Bachelor in Paradise” on live television (vs. the constantly buffering Hulu).

But of course things don’t always go according to plan.  I fell asleep and missed the pool.  I talked to my son and grandson (first day of school report!) on the phone for quite a while, which spilled over into “drink at the bar” time.  Since I’ve rarely ever had a drink in a motel bar, this was not exactly a disappointment.  I was so hungry by then that I was out of the mood to change from baggy shorts and wrinkled t-shirt into an acceptable sundress, so I drove to Pizza Hut for a small pepperoni to go.  I would eat in my room, in front of tv.  It would be wonderful.

By the time I returned with my little pizza (first carbs in 3 weeks), there were 15 minutes left before Bachelor in Paradise started.  Perfect timing.  My joy knew no bounds.

Until… I discovered that ABC was not working on the television.  The nice woman at the front desk informed me that the problem was with Directv and only ABC was affected.

Are you kidding me?

It would have to be “House Hunters” and pizza, then.

Banjo Man knocked on the door at 10 and staggered inside with three suitcases.  He’d brought his collection of old farm tools in one of the massive suitcases. 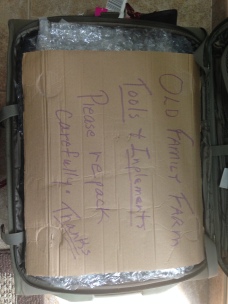 The next morning we did something we’d always wanted to do but had never done:  eat at a “Diners, Drive-Ins and Dives” restaurant.  Harley Chick had told me about Frank’s Diner, in Spokane.  So we packed up the car and by 7:00 AM we were at Frank’s. 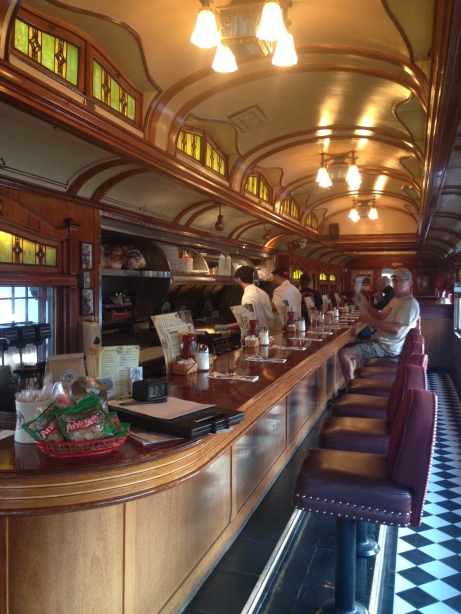 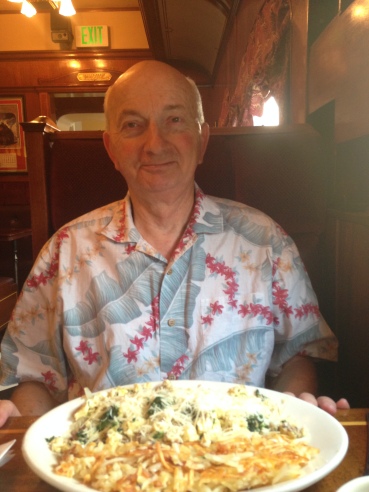 He looks happy about his breakfast, doesn’t he? 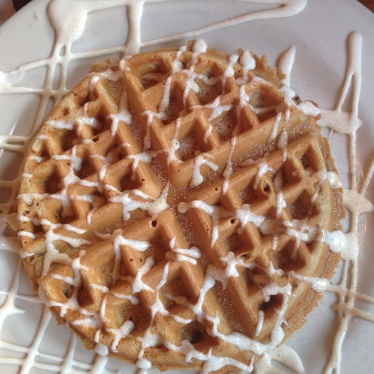 My pumpkin waffle.  So pretty.

So my Plan B worked out well.  We were back home at the lake around 10 AM.  No driving at night while exhausted was a good decision.

As was breakfast at Frank’s.  Check it out:  http://franksdiners.com/

This entry was posted in family, food, lake, road trip. Bookmark the permalink.