when your uncle is in town

…this is what you do.

There was some success in the fishing department. 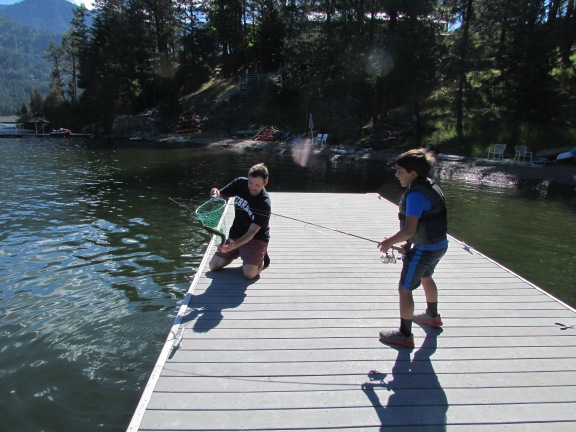 They threw it back and hope to catch it again next summer.

There was also a lot of arrowhead hunting, of which Uncle Will is a master.  He found three in the first couple of days he was here, which is nothing short of a miracle.

I think they might be talking about Nebraska football.

It is now August 9 and the smoke from distant fires in California and Oregon are filling the skies.  It’s worse in the morning and eventually gets better as the day goes on.  So, for now, it’s bearable.

The Cougar Fire is about 8 miles away and burning slowly eastward (a good thing).  The fire crews have set up camp at the school for the time being.  I’m thinking I should bake some brownies and take them over there.  Banjo Man says there is no hungrier group than a fire crew.

This weekend is traditionally the busiest weekend of the summer in Sandpoint.  The music Festival concludes and the Arts & Crafts Festival is Saturday and Sunday.  The Sandpoint quilters are holding their biennial show and of course Saturday is the Farmer’s Market.  There is also a self-guided Artists Walk and Trail, too.

We won’t be attending the Festival Saturday night, but we’re going to try to hit the rest first thing Saturday morning.

I’ve spent a couple of days cleaning my office and the lower deck.  Now there is room for the music stuff and the sewing machine.  I’m getting prepared in case the smoke forces us indoors next week and there are no hours spent reading on the beach or floating on my inflated chaise lounge.

I love to float.  I tether my “chair” to the dock so I don’t drift into shore every ten minutes.  It’s ridiculous and heavenly at the same time.

The best things are.

This entry was posted in family, lake. Bookmark the permalink.