after all these years 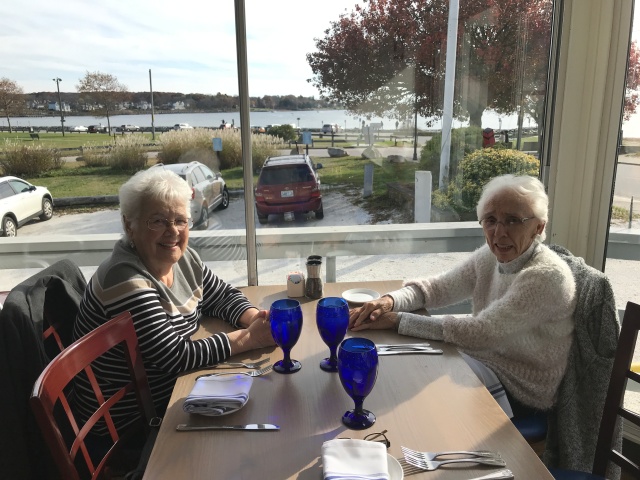 Out to lunch at Top of the Bay, at Oakland Beach in Rhode Island.

They’ve known each other for sixty-two years.  Mary (left) is 90.  My mother (right) is 92.  They lived across the street from each other back in the 50’s, in the “Leave It To Beaver” era of family life.

They were stay-at-home moms, had dinner on the table at 5:30 every night and reapplied their lipstick before their husbands were due home from work.  They may have even worn aprons.

They drank coffee and smoked cigarettes and went out dancing on Saturday nights.  Mary and her husband Pasco always won the dance contests and returned with champagne.

Eventually we moved to the country, Mary and her family to California.  They would later return to Rhode Island for many years, until Mary moved to Florida.  Mom and Mary talked on the phone several times a week.  They still do, especially with my mother in an assisted living home and Mary in a senior apartment complex.  They now live 25 miles apart, but it may as well be 200 miles.  So I organized a day out and off we went.

They are, as the saying goes, as “different as night and day”, but those early bonds go deep.

I hope I’m still having lunch with my girlfriends when I’m 90, don’t you?

This entry was posted in family, friends, rhode island. Bookmark the permalink.

2 Responses to after all these years