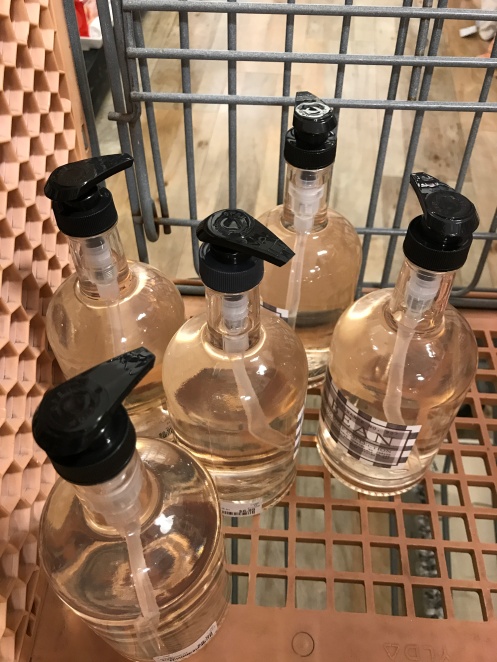 See these bottles?  They are filled with vanilla bean-scented liquid hand soap.

At the risk of having you think I have become one of those crazy hoarders you see on television, I will confess that I now own nine of these.

I went to five stores to hunt them down after sniffing the one and only bottle at TJMaxx and discovering–with great joy–that it smelled almost exactly like my favorite vanilla-scented soap from Paris that isn’t made any more.

Well, it’s still made but it’s not the same formula and is very disappointing.

Many years ago I was invited to join a writer friend who was spending six months in Paris.  Of course I had to do a lot of research before I stepped on the plane.  One of the tips?  Wear black.  Another?  For bargain gifts to take home to the USA, buy giant bars of Le Petit Marseillais soap (for about a dollar each).

And so I did.  My suitcases were loaded with many bars of Le Petit Marseillais soap and two tins of chocolate from Belgium.  What could be better?

I replenished my vanilla soap stash a few years later, when I met My French Friend Janou in Paris for a week of shopping (Paris Flea Market) and sightseeing (Mont St. Michel).

(I’ve just spent an hour searching for those photos and can’t find them!  Darn!)

Once again, the suitcases were filled with bars of soap when I left France.

I managed to order it online for a couple of years, but then they stopped making it.  It recently resurfaced, but it doesn’t smell the same.

But this is close.

If you like the scent of vanilla and you’re as fussy as I am, try to find a bottle and sniff for  yourself!

This entry was posted in a more pie opinion, rhode island, shopping. Bookmark the permalink.