a birthday, twin oaks and tiramisu 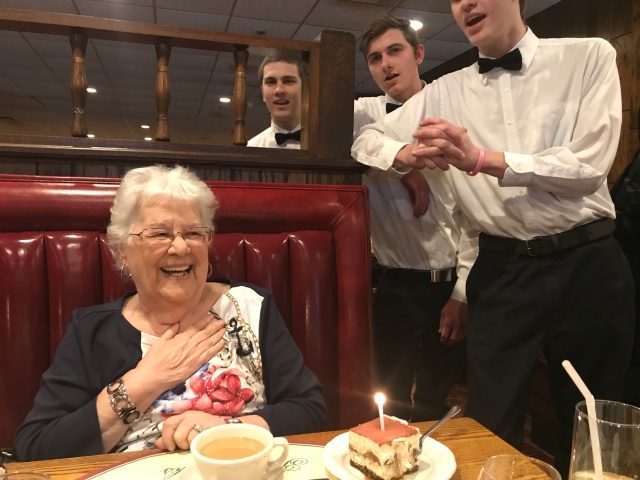 On Wednesday my mother’s good friend Mary turned 90.  Since her daughter was in Florida and Mary has no family left in Rhode Island, Mom and I decided we would help her celebrate by going out to lunch.

This was not as simple as it sounds.

First of all, there was some confusion at Mom’s residence that gave us a late start.  And then after I stopped to pick up a bouquet of flowers in Warwick, I overshot the turn to Mary’s retirement apartment complex (off busy Route 2 and in a wooded residential area).  In my defense, I was attempting to decipher my mother’s garbled story of missing a shower and three nurses telling her something she was sure was wrong but she couldn’t remember what it was.

That’s where things became even more confusing.  I knew there was another way to get to Mary’s, and I knew I was close.  So I called Mary for her address so I could plug it into my GPS and negotiate the wooded back roads.

Mary couldn’t remember her address and had to go to her desk and find a bill with the address on it.  She wanted to know where we were, but there was no way I could explain it.

The GPS led me to the building in less than three minutes.  I took Mom to the side entrance, where we’d entered before, got out the walker, escorted her to the doors and then parked the car.  I called Mary and told her we’d arrived.  For some reason she thought we were at the Christmas Tree Shop, a store three miles away.

We were obviously at the wrong building.  There are three of them and we were at the one in the woods and around the corner.  The GPS had sent me to the wrong building and, unfortunately, they are all identical.

Neither my mother or Mary could understand how I’d gotten mixed up, though, because after all I’d been there once before.

But this time I drove in from a different direction, I tried to explain.

The nonagenarians thought I was a bit dim.

So we returned to the car, fighting the walker and the wind and the icy parking lot, and drove around the bend to–voila!– discover the other two buildings.  And we did it all–drop off, walker, doors, parking– again, only this time Mary was waiting at the door and we were in the right place.

I gave her the flowers.  She was thrilled.  She didn’t have a vase so we emptied her cookie jar and arranged the flowers while my mother rested on the couch.

And then we set off to Twin Oaks, a legendary Rhode Island restaurant in Cranston that began as a speakeasy in 1933.  It burned down in 1980 or so and was rebuilt.  If you live in Warwick or Cranston, the Twin Oaks is where you go for Sunday dinner or birthdays or business meetings or any kind of special meal with family and friends.  Its dark wood paneling hasn’t been changed since 1981, its booths are deep and plush, the waitstaff is friendly and the menu is extensive, from seafood to sandwiches to pasta to steak.

There are 23 items on the dessert menu, including jello.  It’s that kind of place.

Of course we got lost getting there.  It’s tucked into a neighborhood off the main road and there were inexplicably no street signs.  But we found the restaurant eventually.  And once the ladies were settled in our lovely, large booth, I immediately ordered tequila.

And it was delicious.

All three of us ordered Twin Oaks’ famous baked stuffed shrimp.  We ate every bite.  And then it was time for dessert.  Mary thought she was too full, but I told her she had to order something so we could put a candle in it and sing.

She thought I was joking.

And she had never heard of “tiramisu” before.

I thought she was joking.  You’re Italian, I said.  It’s a famous Italian dessert.

The song was a hit, as you can see from the photo.  The tiramisu was pronounced delicious.  A good time was had by all.

I asked Mary what her favorite birthday was.  I expected a childhood story or two, but she told me she’d only had two birthday parties in her life:  her 80th, given by her daughter and this one.  She grew up in a very poor family where birthdays were not even acknowledged.

So I was very glad she’d ordered the tiramisu.

There was a bit of a bottleneck getting out of the restaurant, as two other parties with ladies with walkers were either trying to get out of the door or into the cars that had pulled up in front of the doors.  I saw one woman who had to be a hundred years old.  She wore tight black leather pants, gold hoop earrings and a blond wig.

As I tried to back up the car and leave the parking lot, Mary thought that a very rude driver was blocking my way.  Yes, the woman could have waited about thirty seconds before partially obstructing the drive, but she was intent on picking up a group of elderly people shivering at the front of the building.  Mary started yelling her disgust at such rude treatment, a surprising loud Italian tirade of epic proportions.

I didn’t realize until two minutes later, as I drove out of the parking lot without hitting any cars or people, that Mary’s window was wide open.

Of course I got lost on the way back to the apartment complex.  Because when a ninety-year old woman full of tiramisu tells you–seven times–to turn left at the flashing light, you end up driving down a long wintry road to the Rhode Island Beagle Club.

None of wanted a beagle, so I turned around and tried again.

Despite all of the confusion, the day had been a success.   What’s not to love about going out to lunch?

This entry was posted in family, food, friends, rhode island. Bookmark the permalink.

4 Responses to a birthday, twin oaks and tiramisu