Guess how old he is? 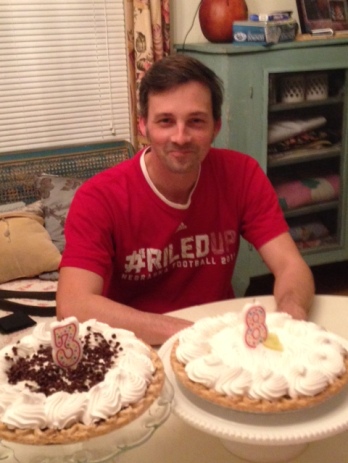 Saturday began with brunch, continued on to another frustrating Husker loss, went on to Mexican Train dominoes, and then a trip to Grandma’s garage where the “kids” discovered an old candy box filled with old postcards from 1947-1963.  The small silver-colored box was inside a box of games and must have been removed from one of my mother’s closets some time in the last year or so.

We had a ball reading those postcards.  Many were sent by my father while he was out to sea while serving in the Navy.

They were wonderful reminders of him and it almost felt as if he was partying with us that afternoon.

Thank you, Nephew Thomas, for the pies.

Thank you, Dad, for the postcards.

This entry was posted in family, food, just for fun, rhode island. Bookmark the permalink.