it seemed like a good idea at the time 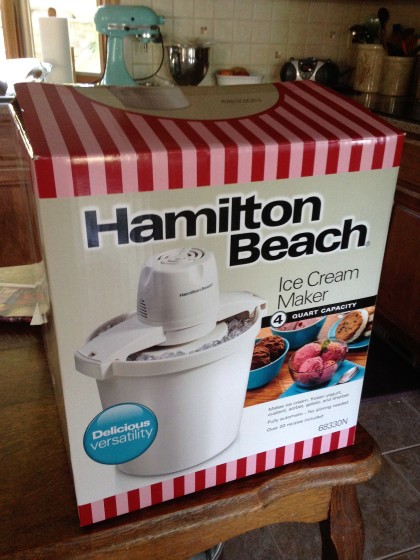 The Funny Grandson delights in discovering how things are made.  After two years of successful jam-making, he asked me if I knew how to make shredded wheat (I discovered later on that it was his favorite cereal and his parents frequently ran out of it, much to his frustration).

What better solution than to have Grandma whip up a batch whenever she visits?

(For the record, I don’t know how to make shredded wheat, but I’d bet someone on Pinterest knows).

So what does this have to do with ice cream, you ask?  Well, I had the brilliant idea of making our own ice cream this summer, something I was sure would delight the FG no end.  So I read a zillion reviews and, after drooling over the $400 Cuisinart with its own compressor, decided to go with the popular $29.99 Hamilton Beach 4-qt electric ice cream maker.

I had it shipped to the lake a couple of weeks ago so it would arrive when I did.  I bought lots of cream and a gallon of milk and a bag of ice and–eventually– rock salt (it took trips to FOUR stores to find rock salt!) and special plastic containers just the right size to store ice cream in the freezer.  On Thursday I was ready to practice, having not made ice cream in about 40 years.  But after I opened up the box I discovered the canister was badly dented.  It would have to go back to Amazon.

Dancing Mandolin Player offered her Cuisinart, a snazzy looking little machine that makes 1.5 quarts of ice cream while sitting prettily on the kitchen counter.  It needs no rock salt or ice; you freeze the “bowl” overnight, pour in the ingredients and let it do its thing for 20 minutes.

Sounds like a plan!  I put the bowl in the freezer and planned to make ice cream the next day.  I would test a vanilla recipe and chop frozen peaches to add to it.  Oh, the excitement!

Then Son #1 called to say hello and in the midst of the conversation asked if I would have almond milk here at the lake for the FG’s visit next week.  They are staying away from dairy products to see if that helps FG’s sensitive stomach.

I feel his pain.  I don’t drink milk either.  And I much prefer the “dairy custard soft ice cream” to the real scooped-from-the-tub ice cream if I’m going to treat myself to a cone.

I have read–okay, a long time ago–that heating milk changes the “lactose” factor somehow.  I wonder if that would help in the future ice cream making process.

I’ll plan to make some fruit sorbets, too.  And will google ideas for almond milk ice cream (it should be possible, right?).  And then there’s frozen yogurt to experiment with.

So today I’m heading back to town.  The Hamilton Beach machine will be shipped back, the rock salt will be returned and I will stock up on almond milk and strawberries (for that sorbet).

Grandma Has A New Plan.

This entry was posted in family, food, grandmother stuff, lake. Bookmark the permalink.