Yesterday’s lunch had been planned for a month!  That’s what you have to do when five busy women want to get together for an afternoon by the lake. 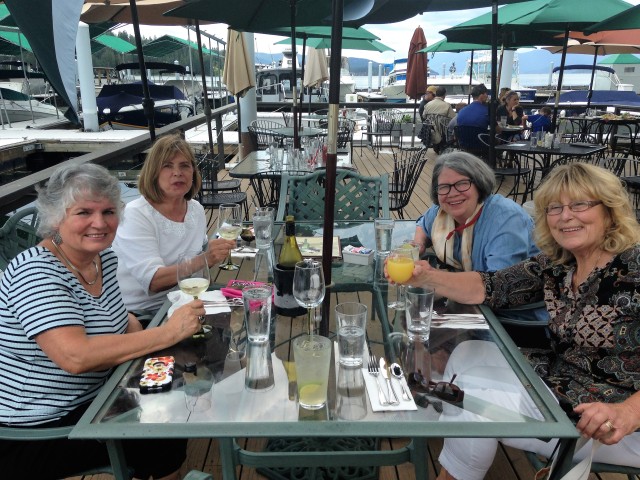 The weather cooperated, with sun and clouds alternating above our heads.  The shrimp was fabulous.

Shrimp with sweet chili sauce and homemade slaw with a touch of coconut.  Be still my heart.

And the drinks were pretty tasty, too.

We caught up with each other’s lives, with talk of grandchildren and travel and weddings and house remodeling.

It had been quite a year.  No less than three new babies are expected between now and October.

Later in August we’ll do it again, perhaps wearing housedresses over our bathing suits and spending an afternoon on the dock and in the lake and on the porch.

The sun was out this morning and the sky is blue!  It is the first true summer morning I’ve experienced since arriving two weeks ago.  I was up at five, thinking the clock said six.

But there are cakes to bake and a cheese sauce to make and scales to practice on the violin and music to organize, plus time on the treadmill and a shower…which all have to take place before 10:30.

So it’s a good thing I was up early, gazing happily at a cloud-free blue sky and smiling at the mountains!

This entry was posted in food, friends, lake. Bookmark the permalink.