day in, night out in austin

Will and I planned to be there.  Of course.  Johnny no longer does the Wednesday Happy Hour, so when he does appear at the Saxon it’s a real treat.  The Saxon used to have a lot of parking available, but the recent condo development on one side and the two new restaurants on the other have squeezed their parking into a small area.  Parking in the neighborhood behind the bar is still an option, but these old places are being threatened (and demolished) constantly here in Austin. 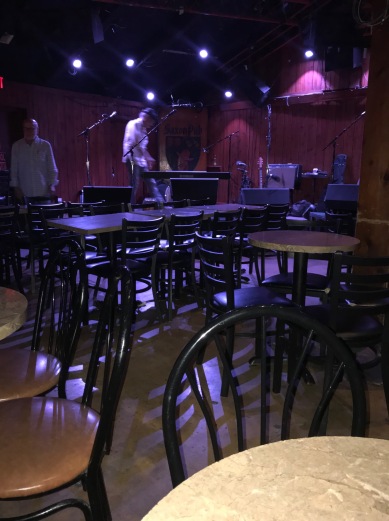 The band starts setting up. Mid-set the guitar’s amplifier would die, which meant Johnny played the keyboard more than he expected to.

It was a great show and the band sounded especially great.  Scrappy Jud Newcombe played a small 3/4 guitar that sounded beautiful.  The neck looked wider than normal and the placement of the sound hole was unusual, so I don’t know what it was.  I intend to find out, though.

I’d spent Wednesday puttering and sewing.  Tuesday I’d spent several hours walking around town, defying the heat and humidity to duck into shops to browse.  The St. Paul’s thrift shop has gone, as has another of my favorite vintage stores.  The largest one, Uncommon Objects, can no longer afford the lease and is moving elsewhere next week, well out of walking distance from the condo.  There are more restaurants along South Congress now, and some lovely jewelry stores and expensive clothing shops, but I’ll miss browsing for vintage artifacts and clothing.

On the way home I ducked into Torchy’s for a taco and cold drink before walking the last couple of blocks home.  I made it right before the rain began and eased Will’s worry that I was outside somewhere getting drenched.

So yesterday I stayed out of the hot weather and did this. 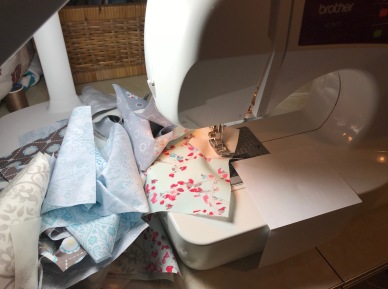 Progress was made on the snowball-patterned baby quilt.

The Funny Grandson and his parents might come down later on this evening, but that depends on how much energy they have.  I told them not to worry if they were too tired–they certainly get up early and have very busy days!  I think we’ll either send out for pizza or walk up to the Magnolia Café for dinner.  I’ll make chili for Friday and Saturday, then a lasagna for Sunday’s Early Birthday Party.  FG turns 7 in three weeks, but I told him we’d have a party here before I flew back to Rhode Island.

He’s going to spend the night down here Sunday, because he doesn’t have school, and we’re going to go out for breakfast.  I may have promised root beer floats for lunch…

So today?  I think I’ll head back up the street.  I saw a pair of blue glass violin salt & pepper shakers at Uncommon Objects that I may not be able to live without.  For $8 I might just have to indulge myself.  And then there is Torchy’s and the Trailer Park Taco for lunch.  I’m going to try something other than the Fried Avocado this time, wild woman that I am.

Time to enjoy the sunshine…