Have you risked your health to go to a grocery store lately?  We’ve all heard of toilet paper shortages, but did you know there is NO FLOUR?  No sugar.  No brown sugar.  No yeast.

Does this mean that people are home baking up a storm?  They must be.  Pies and cakes and breads (I wonder how many bread machines were retrieved from basements) could be lining kitchen islands like a county fair display.

Back in the old days when I was a young mother out West, I baked my own bread every week.  I made my own pizza crusts, my own cakes, cookies and doughnuts.

I bought yeast in large cans.  I bought flour in huge bags.

I don’t do that any more.  I buy those supplies in small amounts.  So when the Evil Virus descended upon the earth, I was not prepared with extra bags of flour and sugar.  I guess it never dawned on me that we would be isolated for so many weeks and that I would feel like baking.

Having something yummy to snack on is a real treat during these long days at home.  I’ve limited my baking to once a week and we make the treats last as long as we can.  But I am down to 4 cups of flour and 2 cups of sugar now.

My friend Barb, who bakes pies and cakes and cookies on a regular basis, was shocked by not being able to find flour at the grocery stores.  She even called the folks at King Arthur to order directly from them.  Their response?  Don’t even think about it.  It would be two weeks before they were caught up.

When I placed on online order from Shaw’s, a local chain, I wasn’t able to find flour.  I thought it was a computer glitch until Barb set me straight.  Son Ben said there was no flour on store shelves in Round Rock either.

So the world is baking.  I like the idea of people discovering the fun of baking cookies, the challenge of making a pie crust, the thrill of watching a loaf of bread rise in the oven.

In spite of the Evil Virus, maybe the country smells like…pie.

What a happy thought! 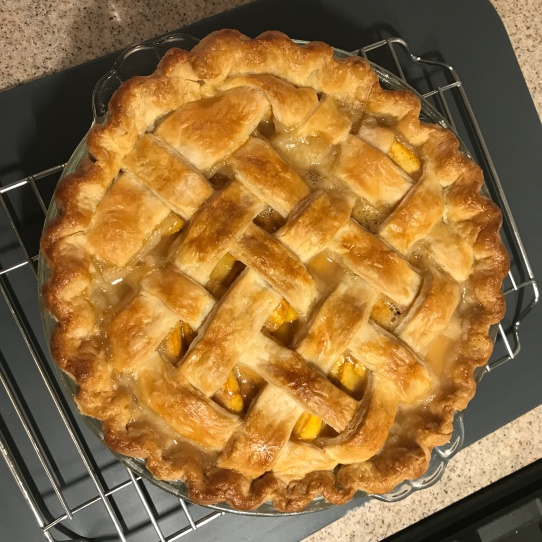 This entry was posted in family, food, rhode island. Bookmark the permalink.

7 Responses to the hoarding bakers