If you’re hungry for Mexican food, there’s a little place on W. Oltorf in South Austin that has the best!

This is Will’s favorite food in Austin (aside from where he works at Terry Black’s Barbecue, of course!).  Banjo Man and Son #1 love it, too.  And now my daughter-in-law is a fan, having had breakfast there after the “crane operation” yesterday.

You know how much I love taking food pictures, so here is what we had for lunch on Monday after yet another adventure in Home Depot. 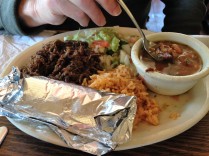 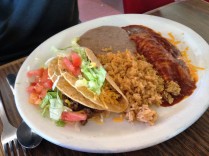 I loved my crispy flautas and Banjo Man thought the bean soup was the best he’d ever had (the smoked ham pieces really gave the broth a delicious flavor).  Will had the combo plate with tacos and an enchilada.

If you want to check out the menu, here’s the site:  http://www.habanerocafe.com

Over the years of SXSW I’ve learned to make giant crock pot meals and let everyone eat when they want.  Forget planning sit-down meals!  Often there is not enough time between music venues to make dinner and having something to heat up in the microwave is the best option.  Dining out can mean waiting in long lines and gets expensive, so we don’t rely on restaurants for our meals.  So far we’ve had Italian meat sauce with spaghetti and Asian beef with rice, along with lots of salads and fruit and cheese.

Tuesday afternoon Banjo Man, Will, Son #1, the Funny Grandson and I walked down the street to Hopdoddy, the ultimate South Congress hamburger restaurant.  We waited in line–of course!!!!–but it was worth it because we wanted really good burgers and Son #1 had never been there before.  They use fresh and homemade ingredients (they even make their own rolls) and the French Fries are so, so good.  The FG had an Oreo milkshake, ambrosia for a 6 year old.

This afternoon we are all heading over to Lucy’s  Fried Chicken for music, margaritas and fried chicken snacks.  I have two roasts crammed into the crock pot for beef sandwiches later,  and Banjo Man inexplicably bought a watermelon.

I thought watermelons were for August, but what do I know?  He is pretty excited about it, but he is also excited about painting the bathroom this morning.

It’s going to be an interesting day.

This entry was posted in austin, family, food, texas. Bookmark the permalink.