First of all, the sun is shining and the temperature actually reached 65 yesterday.

Secondly, I am sick again.  It started out as a simple head cold last Friday, so I pampered myself all weekend with Ginger Ale and lots of time resting in bed.  Tuesday I felt much better and even made dinner.  But yesterday morning things changed for the worse, so Banjo Man hustled me to see the doctor, who recommended chest x-rays and lots of medications and plenty of bed rest.

It turns out I don’t have pneumonia–thank God–, but I do have bronchitis for the third time this winter.  Before this winter, I have not had bronchitis since I was 14.  So what’s going on?  I think I’m going to blame the pneumonia shot I had last December (the one that infected my whole arm).  I think it messed with my immune system.  Call  me crazy, but that’s my theory and I’m sticking to it.

I comfort myself with the prospect of sunshine and warm air on the dock in Idaho in five weeks.  Yes, five weeks from now.

Thirdly, we had a great time in Nebraska!

Friday night at Haymarket Square with my sons.  Yes, it was chilly.

I left flew out Friday morning, boarding the plane at 5:30 AM.  Remember I told you there was a bit of an adventure before I got to the airport?  The parking lot I had decided to use–and booked a reservation online for–didn’t exist when I cruised down Post Road at 4 AM looking for it.  I pulled over into a dark parking area and called the number, which turned out to be disconnected.

There was another one, which I had decided against in the first place due to the fact that they didn’t offer shuttle service to the airport and instead let customers off at the far end of the sky walk.

But my only other option was getting back on the Interstate, turning around and negotiating the very large, scary-at-4 am, long term parking lot.  Never mind waiting for a shuttle while alone in the dark.

The nice young man at the office of the parking lot told me they were booked up.  But he felt sorry for me and took my car anyway.  I gave him a big tip and my many thanks.  By the time I got to the airport I had about 45 minutes before boarding the plane, so it all worked out well.

Then I flew to Chicago and met my boys, Ben and Will, at their gate!  They were on the same flight from Austin, so we had breakfast together and waited for over 3 hours for the next flight (there was a delay while Southwest replaced a plane).   Ben indulged his weakness for Dunkin’ Donuts, which always make him happy.

Banjo Man was waiting in the Cell Phone Lot in Omaha.  This was his first Cell Phone Lot experience and he was nervous about it, but it worked out perfectly.  Old dog, new tricks.  Yay!

The next stop would be the International Quilt Study Center in Lincoln.  Also known as the “Quilt House”.

The International Quilt Study Center & Museum’s mission is to build a global collection and audience that celebrate the cultural and artistic significance of quilts.

The International Quilt Study Center & Museum at Quilt House is located on the University of Nebraska-Lincoln’s East Campus at 33rd and Holdrege streets. The museum has the world’s largest publicly held quilt collection, dating from the early 1700s to present and representing more than 50 countries.

We envision the IQSCM as a dynamic center of formal and informal learning and discovery for students, teachers, scholars, artists, quilters and others. Our comprehensive and accessible collection of quilts, related textiles and documents form a primary text for study, insight and inspiration. IQSCM is an academic program of the Department of Textiles, Merchandising & Fashion Design in the College of Education and Human Sciences at the University of Nebraska-Lincoln. The department offers a unique masters degree in Textile History with a quilt studies emphasis, which is the only program of its kind in the world.

I have visited several times.  But this was going to be extra special, because an exhibit of Ken Burns’ quilts was on display.  That visit deserves its own post and because I have lots of photos, I’ll save it for another blog post.

I loved the quilts.  And I really missed my mother-in-law, who loved quilts, too.  I guess being back in Lincoln and maybe being a little over tired and awestruck at Ken Burns’ loving appreciation of quilters and missing a woman who taught me so much, it was all I could do to not break down in tears.  Back at the hotel I shut myself in the bathroom and had a “come apart” (as my friend Ann calls it) in private.

And then it was time for the party to begin.  Some of the family arrived in town while I was gazing at vintage quilts, so off we went downtown to Haymarket Square (an unbelievably revitalized section of the city) for dinner. 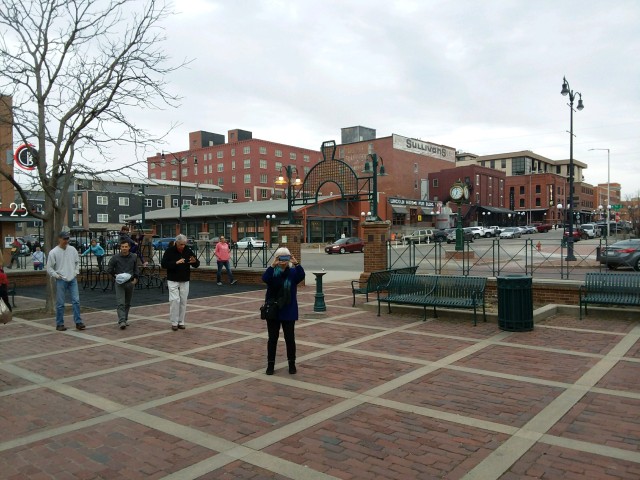 Note the three guys on the left.

It was good to be together.

This entry was posted in family, quilting, rhode island, travel. Bookmark the permalink.